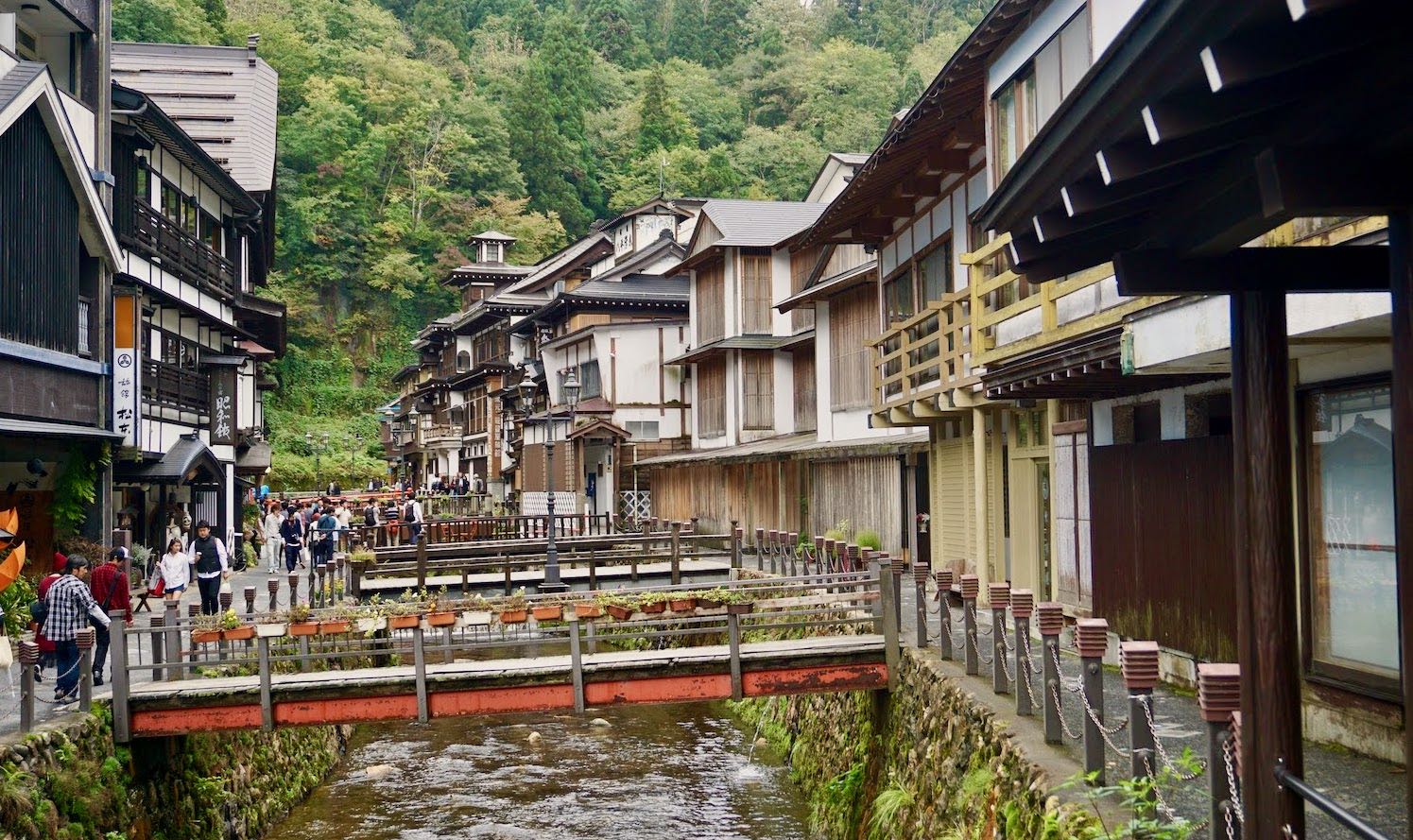 Six onsen resort towns that retain all their old-time charm and quaintness. Stroll around the village in your yukata robes and feel like you travelled in time.

With hundreds of onsen hot spring towns and literally thousands of bathhouses around the country, picking one is hard. Especially because many famous historical hot spring towns have been spoiled with modern architecture (think massive concrete hotels…). However several onsen resort towns retain all their old-time charm and quaintness. Here’s the top 5 of the most charming onsen towns in Japan.

Just 2.5 hours from Kyoto, Kinosaki Onsen is a magical destination in all seasons. Feel transported in time as you stroll along a willow-lined river in your in yukata (cotton kimono) and geta (wooden clogs), visiting the 7 public bathhouses.

According to local tradition, visiting all 7 baths brings good luck! A one night stay at any one of the ryokan or hotels in Kinosaki includes a pass to all the public bathhouses. If not staying for the night, you can purchase the pass at any of the bathhouses for about 1300 yen.

In addition to soaking and wandering the town, other activities include shopping, making your own hot spring-boiled eggs, tasting the famous local crab delicacy, visiting the Onsenji temple, cycling, hiking in the surrounding mountains.

This secluded hot spring town nestled in the mountains of Yamagata Prefecture is well worth the trip. The area originally developed around a silver mine, however these days it is known as one of Japan’s prettiest onsen towns with historic ryokan lined up along the river. Admiring their façades, you may be reminded of the Studio Ghibli Spirited Away bathhouse! Charming in all seasons, and especially in winter.

Enjoy one of the 3 reasonably-priced public baths, the foot onsen on the riverside, and don’t forget to visit the beautiful waterfall just outside of town.

Preserved by local efforts to maintain its traditional feel, Kurokawa Onsen is a storybook village. Its lanes are lined by ryokan, public bath houses, cute shops and cafes, a small shrine and bridges that lead over the river directly to ryokan entrances. Stroll around in your yukata and geta sandals and visit one of the 24 bathhouses.

The town, located in the Aso mountain range, is particularly famous for its large rotenburo (outdoors baths) offering impressive views. Some of them are a bit outside of town, like Yamamizuki ryokan (available for overnight guests and day trippers too).

For 1300 yen, get an onsen-hopping pass valid at any of the 24 participating bathhouses (you can get it at the visitor centre or any of the onsen).

In a small valley deep in the heart of the sacred mountains of Kumano, Yunomine Onsen is an integral part of the over 1000 year old Kumano pilgrimage tradition. After their long walk, the pilgrims performed hot water purification rituals in the mineral waters before the worship at Kumano Hongu Taisha temple.

The riverside is lined with old pipes sucking the onsen water for the bathhouses. Tsuboyu, a tiny cabin right on the riverside, is the the only bathing onsen registered as UNESCO World Heritage. You can use it privately for up to 30 minutes – especially popular with couples. However it’s first-come-first serve, so the wait can get long when the town is busy…

Not to worry, because there are many other things to do: cook your own hot spring egg, visit one of the numerous public bathhouses, or hike to other interesting villages in the surrounding mountains.

Visit the famous Kumano Hongu Taisha temple, Wataze onsen town, or dig your very own onsen bath in Kawayu! Yes, that’s right – the hot source bubbles up directly from the stony riverbed, which means that you can create your own little bathtub, and let in the exact amount of cold river water for the desired temperature. Digging is no so easy, so you may want to re-use the holes of previous bathers! In winter, a big common pool called Senninburo is dug by the city for everyone to share. Convivial, and free!

Get three treats in one: a top ski resort, a great onsen town, and a gem of traditional Japanese architecture, all in one place. What’s better than ambling through the winter wonderland of the old village, then relaxing your muscles in a hot bath after a day of skiing?

Explore the dozen traditional soto-yu public baths like the famous Oyu, as well as the foot onsen ashiyu – admission is free! Somewhat unfortunately, most of the public baths are indoors only, except for Furusato no Yu located on the slope up to Ogama (admission fee applies). Most accommodations have their own baths, so to enjoy the snowy surroundings from your steamy bath, make sure yours offers a rotenburo outdoors bath.

Make sure to also check out Ogama, the quirky open-air kitchen of the village, where the spring emerges at quasi-boiling temperatures.

Nozawa has lately become popular with Japanese as well as foreigners, which means that you will be able to easier communicate in English, but may feel less immersed in local culture…

Okuhida Onsen is all about the surrounding nature. It’s a collection of 5 onsen villages, known for its rotemburo outdoor baths with majestic views of the Northern Japan Alps. Hirayu is the oldest and largest of Okuhida’s onsen towns, with Shin Hirayu being the second largest.

Some of the best baths include Hirayu no Mori, Suimeikan Karukaya or Okuhida Garden Hotel Yakedake which are ryokan that also offer day passes. You can also take the ropeway for panoramic views of the valley, visit the waterfall and the local traditional

In winter, Hirayu is also a ski station that is less famous and crowded than many others, so it’s a perfect choice is you are looking to escape the crowds.

Wondering how to find all the onsen bathhouses nearby?

Download the Michi Japan app, which lists most of the bathhouses and ryokan inns open for daytime visitors, as well as ryokan inns to spend the night. Find the price, opening hours, types of baths and of course the location on the map.